IFA 2017: A Success for Naranga and Attendees Alike 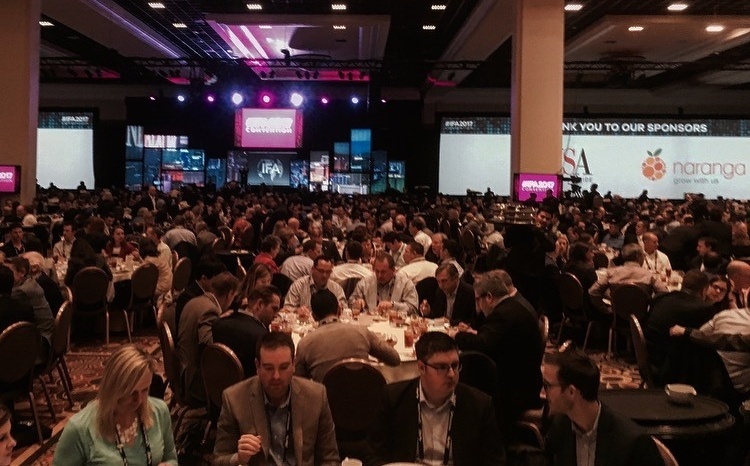 Where to begin? The International Franchise Association 2017 Convention in Las Vegas was one for the books. It was a great location and event for franchise industry folks to gather together and have a wonderful time, both professionally and socially. Each day was packed full with informative sessions. Naranga had a particularly successful event and we’re excited to share some highlights from the show.

We were a proud sponsor and host of the Operations Summit at the convention. We had a phenomenal turnout, with standing room only once the session began. Naranga’s very own Vice President of Technology Solutions & Delivery, Faraz Iqbal, kicked off the session with an exciting and engaging intro, followed by an informative few hours shared by three industry professionals focused on the importance of operations within your business.

One topic that kept coming up during the summit was the need to develop the right company culture and environment for employees. This eventually became one of the key takeaways from the entire summit, and Naranga as a company could not agree more. Like most aspects of life, a positive attitude and culture is critical to the overall success of your brand.

The conference offered many valuable sessions, but the opening General Session luncheon on the first day of the event stood out from others.

The session featured some great speakers, one of whom was Aziz Hashim, chair of IFA and one of the most successful multi-unit franchisee operators in North America. He shared a personal story about how he followed his gut and pursued the franchise industry despite having graduated from college with a degree in engineering. “Franchising is the national treasure that allows people to realize the American Dream,” he said during his remarks, urging attendees to make an active effort to keep franchising easy, safe and accessible to all.

Hashim, who is serving his final year at the association’s chair, started his speech with a personal story, sharing that he is where he is today due to the love and support of his parents, who emigrated to America to create a better future for their children. Looks like they definitely succeeded.

Following Hashim’s speech came remarks from New York Times best-selling author Tim Ferriss, best known for his book The Four-Hour Workweek. His information-packed keynote address offered very clear takeaways and had the 4,000-person audience pumped up and inspired. His presentation left attendees very satisfied with his informative and genuine answers to the many questions they asked.

That’s just a snapshot of IFA 2017, but as you can tell, it was a great convention. We met with people both new and familiar to us and could not be more pleased about their response to Naranga or the conference itself. We loved all the positive energy IFA 2017 offered and are looking forward to many more events by the association.

Naranga is on Entrepreneur’s Top Franchise Suppliers ranking. Help us become the best!

Streamlined communication is a new black: 7 tips to improve it for franchise business